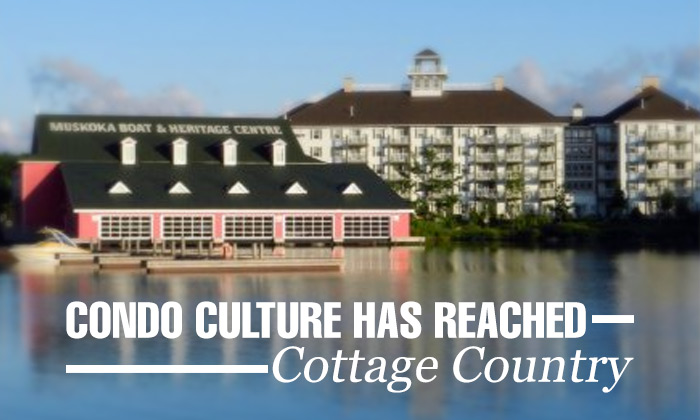 There’s no doubt that buyers have become very interested in the condominium lifestyle. Comparing a picture of Toronto’s skyline from ten years ago with one from today is definite proof of our rising condo culture. With so much construction around the city and so many people migrating into Toronto from around the GTA, it doesn’t seem as if the condo boom is going to slow down in the near future. In fact, the condo trend is moving to new areas of Ontario – cottage country to be more specific.

Areas such as Muskoka, Collingwood, Huntsville and Lake Simcoe have all seen a rise in waterfront communities being built around the idea of luxury condos. They’re replacing the old meaning of cottage country – having one general store for all the town’s needs and driving on unpaved roads to get to two-room cabins – with a new definition – resort-style luxury living mirroring an urban lifestyle.

And with available waterfront property locations dwindling because of a general peak of interest in lakeside homes, developers are taking advantage of every acre available to them. New village centres and resort-inspired communities are being built on old industrial waterfronts and even next to established resorts (1). Condos are also starting to show up near vineyards, orchards, roadside markets and just about anywhere developers find enough space to build their estate meccas.

Huntsville is seeing an upgrade in their real estate market with a new community called “TreeTops at Hidden Valley”. It comprises of 13 four-storey buildings overlooking the Peninsula Lake and Lakeside Golf Course and because of a deal between the developers and Hidden Valley Highlands Ski Club, owners get a free membership to that as well. The amenities seem to be endless – spas, restaurants, boating, fishing, golfing, pools, etc all within walking distance of this community. Just like any condo downtown, owners are free from maintenance responsibilities and can enjoy everything ownership of their unit offers them (2).

But of course, such a lofty lifestyle comes with a price. While living in a waterfront community for $300,000 to $700,000 is a great alternative to having to shell out $1 million for a half-decent home on prime waterfront Toronto, monthly maintenance fees can reach more than $1000 (3). Take Lake Simcoe’s Friday Harbour, another condo community, that boasts more amenities than an owner can use in the 300 days they’re allowed to live in their units (4). There’s a 7km trail in a nature reserve, an 18-hole golf course, 1,000 slip marina, tennis courts, beach volleyball courts, spas, business centres, fitness centres, daycares and so much more for their residents to enjoy. There’s no doubt that this amenity-rich, resort-like community will cost their residents. Is it worth it?

It seems that in trying to transform cottage living into urban communities, these developers have gone above and beyond in what they’re offering residents. So much so that they’ve created a combination of downtown condos and resort-like living in an environment perfect for someone eager to get out of the bustling city but not ready to give up its proximity to everything one might need.

While these cottage country condo developments are only just opening up to buyers, the numbers are very encouraging. Baby boomers are creating a demand for the recreational and retirement living in which these communities are built. It’s great news for urbanites looking to move into cottage country but a little less exciting for those still holding onto the cottage lifestyle so many of us grew up on. One thing is for sure, it’s no secret that people all over Ontario, and arguably across Canada, have been bitten by the condominium bug.

Would you be interested in moving up North to live in one of these communities? Do you think these developments are making a good impact on cottage country or should people make more of an effort to keep the traditional cottage country lifestyle afloat? Let me know at @SignatureMark

A Condo manager and a certified electrician make a great pair