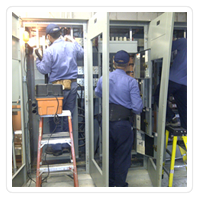 In August I shared a story with you regarding our emergency replacement of a 3000 amp. main switch in a condominium complex. I explained the importance of exercising and cleaning a switchgear in order to avoid this situation in your building.

Well, I’m pleased to tell you that I received several requests for this service since I wrote the August blog entry. Last month we completed the switchgear maintenance at both phase one and phase two of a North Toronto condominium. Service to both of the buildings went very smoothly. Processes included coordination with Toronto Hydro to shut down and reconnect power, and onsite inspections by the ESA (Electrical Safety Authority).

Work at the buildings took place on separate days and involved equipment located in as many as four different rooms. After we isolated the power, we removed all of the covers, operated each switch four times, torqued the connections, re-greased the main switch, and wiped down and vacuumed all of the enclosures. Most people would be amazed to see how much dirt and dust collect inside of these switches. Since cleaners almost never enter these areas, we are often the first to sweep or clean the rooms.

Of course, part of the inspection includes a visual examination of the switchgear itself. In one of the buildings, we noticed three switches with cracked insulators on their operating handles. If one of these insulators had failed during the operation of a live switch, it could have caused a serious short circuit.

In another area, we found some fairly severe damage inside a switch that had been caused by a leak from the ceiling overhead. Someone had patched up the leak in previous years, but they must not have noticed the damage that it caused below. We chose not to even attempt to operate the rusty switches, as we felt concerned that we could not even reclose them after the testing process.

Many of our customers have done well to stay vigilant regarding thermographic inspections. It may be worth noting that a thermal scan cannot detect this type of physical damage, since a damaged switch does not typically generate abnormal temperature levels.

At the site mentioned above, the condominium’s property manager and board of directors approved the replacement of the damaged switches and will schedule this work for completion very shortly.

I recommend that building owners and managers arrange for this type of cleaning and servicing once every five years, and to essentially view these processes as another form of insurance.