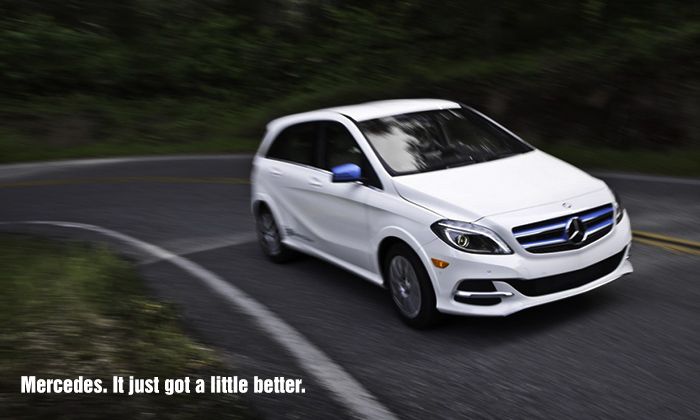 Though experts say the auto industry will still see a large number of natural gas, diesel, hybrid and gasoline vehicles 20 years from now, companies are continuously expanding the EV world with new models. While the EV world was keeping itself informed about Tesla’s plans and developments, Mercedes-Benz was busy cooking up something of their own. Due to come out in late 2015, the Mercedes-Benz B-Class Electric Drive is the first electric vehicle manufactured by Mercedes.

The name derives from it having the body of a B-Class (very popular in Europe). The drivetrain is built by Tesla and though both companies boast their own EV model, there doesn’t seem to be any competition between the two as they’re players in two very different games.

The B-Class is slightly less efficient with a range of 87 miles compared to the 208 miles of the Model S. Of course, it’s what you’re getting with the prices that you pay – Model S comes at a starting point of $70,000 while the B-Class comes at around $50,000. Let’s also not forget to mention that the MPGe (Miles Per Gallon equivalent) of the B-Class is about 84 which actually isn’t that far off from the Model S at 89 MPGe.

While the B-Class is quite less efficient than the Model S, it’s a lot more comparable to the BMW i3. The i3 has a range of 80-100 miles and though it still has a higher MPGe rating than the B-Class, it offers a close enough range that they are sure fire competitors in their own luxury EV category. One drawback is that the B-Class’s fuel steel body makes the vehicle 1,300 pounds heavier than the carbon-fiber-body of the i3 but that doesn’t change the fact that it is rated to go 185 km on a single charge vs the i3’s 160 km on a single charge.

The 28 kWh lithium-ion battery has a lifespan of 8 years or 100,000 miles (similar to  competing EVs) which may push buyers to lease rather than own but upon further thought, it’s not necessarily a deterrent factor. Think about it, regular gasoline-powered cars require owners to put a lot of money into the repair and maintenance of their combustion engine. Is it really that bad to pay for a new battery every 8 years or 100,00 miles? Not necessarily so.

The B-Class is the first electric vehicle for Mercedes and if you take everything into consideration, it seems to be well worth the price. With a longer range and comparable price to the BMW i3, it’s really a matter of details and the weight they put on each one that will sway every buyer. There’s no doubt that Mercedes has put a competitive player into the industry. Due to come out in early 2015 for Canada, it will be interesting to see how it fares compared to the established vehicles already on the market.

Has the B-Class Mercedes caught your eye enough for you to make the switch to an EV vehicle? Let me know your thoughts at @signatureMark

Picture from: The Car Connection

Video: Inside an EV Charging Zone

Backing up! Benefits for Tesla Drivers expanded in Ontario

Elon Musk: At The Helm of Exploration