Tesla has announced it will open its own battery recycling facility.

Tesla’s approach to battery recycling is quite different from most automakers who focus on end-of-life applications for battery packs. Many automakers have announced plans to use old battery packs in energy storage systems instead of recycling them to make new ones.

Tesla believes that its own closed-loop battery recycling process will result in significant savings.

“The closed-loop battery recycling process at Gigafactory 1 presents a compelling solution to move energy supply away from the fossil-fuel based practice of take, make and burn, to a more circular model of recycling end-of-life batteries for reuse over and over again. From an economic perspective, we expect to recognize significant savings over the long term, as the costs associated with large-scale battery material recovery and recycling will be far lower than purchasing and transporting new materials.”
Tesla Impact Report (2018)

This is different from a second-life approach for old EV batteries. With Tesla wanting to build new batteries from pre-used metals in a closed-loop, it remains to be seen how. A previously suggested connection with the recycling start-up, Redwood Materials, founded by Tesla CTO, JB Straubel, remains unconfirmed.

The electric carmaker is not alone in this approach, of course. Volkswagen, for example, is reportedly constructing a recycling facility for raw materials in the town of Salzgitter. From 2020, the plant is to churn out 1,200 tons per year, enough for about 3,000 batteries with the potential for increased capacity.

Players from connected industries have begun looking into material recovery too, with Fortum of Finland claiming an 80% recovery rate using a process developed by Crisolteq. The recycling is based on a hydrometallurgical process that first separates plastics, aluminium and copper before recovering cobalt, manganese, nickel and lithium. The materials are then returned to the battery manufacturers for reuse in the production of new batteries. You can find more examples of battery recycling here. 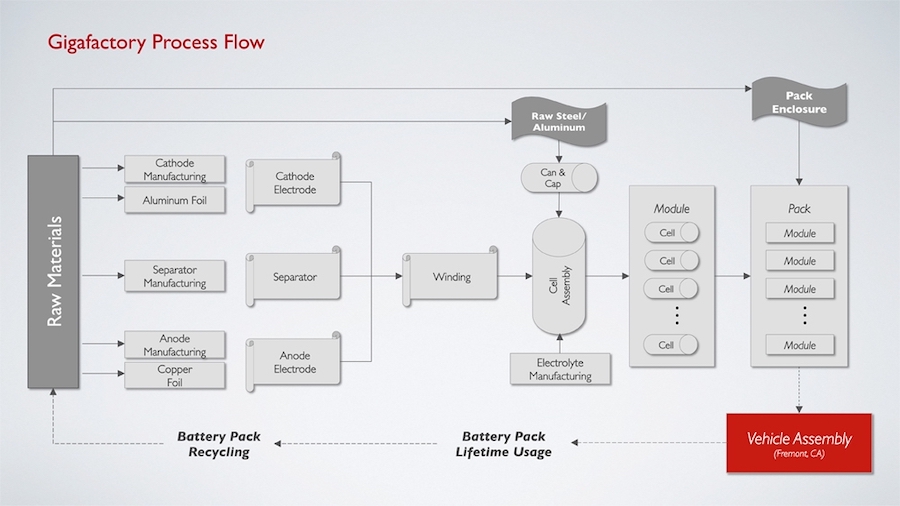 “A common question we hear is, “What happens to Tesla vehicle battery packs once they reach their end of life?” An important distinction between fossil fuels and lithium-ion batteries as an energy source is that while fossil fuels are extracted and used once, the materials in a lithium-ion battery are recyclable. When petroleum is pumped out of the ground, chemically refined and then burned, it releases harmful emissions into the atmosphere that are not recovered for reuse. Battery materials, in contrast, are refined and put into a cell, and will still remain at the end of their life, when they can be recycled to recover its valuable materials for reuse over and over again.”
Tesla is developing a ‘unique battery recycling system’ – Electrek

Tesla seems to be ahead of the recycling curve for now. The good thing is that other car companies are making their own moves towards battery recycling. We hope the trend towards reuse, recycle, and repurpose continues to grow.

Keep following The Electric Blog! Your source for the latest news in sustainable tech innovations.

A global race to a sustainable future

What is Daylight Harvesting?