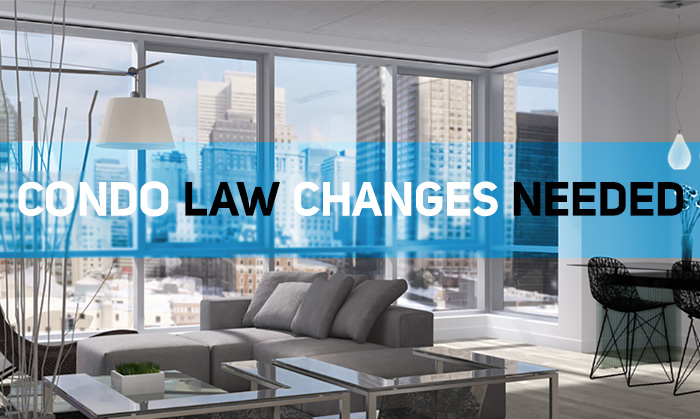 If there’s one thing that the condominium community takes seriously, it’s the fact that it’s exactly that – a community. Both in Canada and the U.S. this recent spike in condominium development has garnered a lot of attention towards what laws are sufficient and what laws need to be changed. This past summer, there was a large overhaul in the condominium market when Ontario updated the Condominium Act – a crucial document untouched since 1998 used to protect all parties in the condominium industry. Since then, there has been a lot of pressure on legislation to tighten laws that have to do with the vulnerability of condo owners in dealing with other condo owners, associations, developers and most notably, lawyers.

Meerai Cho, a Toronto-based lawyer, is facing fraud charges for allegedly robbing her clients of up to $14.9 million dollars in deposit fees. She was holding this amount in trust when she claims she accidentally transferred the large sum to a developer, Joseph Lee.

Purchasers are not buying it

Owners are not buying it, and they want their voices heard. This scandal has caused protesters to call for lawyers to be more regulated. They’ve handed over a petition calling for the Ontario government, the police and the Law Society of Upper Canada to impose stricter rules on trust funds so lawyers like Cho can’t take advantage of their power. The victims are accusing the Canadian government of allowing far too much ‘white collar’ crime and say that it’s time the perpetrators are punished for their actions.

Thomas Ma, a representative of the purchasers, is quoted “‘we are too reliant on the particular lawyer’s reputation. If she can move money wherever she wants, then there’s no control’” and he is correct. It’s a lawyer’s job to know how to work the system, to understand the loopholes, and see where the law can be used to the advantage of their clients. Protesters suggest that lawyers should get some sort of approval before releasing trust funds. One idea is to get another lawyer to sign off on the transfer of funds instead of leaving it to just one lawyer to authorize it.

When approached for comment, the law society made no promise to fix or look into the lack of punishment for corrupt lawyers and instead stated that they “regularly review the ethical rules and requirements for lawyers and paralegals and amend where appropriate”.

One country that’s doing right by their condominium community is the U.S. In light of Torontonians’ fight against increasing white-collar fraud, efforts are being made to reduce fraud and make condo sales smoother in New York City. Senator Charles Schumer and Congresswoman Carolyn B. Maloney have taken an outdated bill, the Interstate Land Sales Full Disclosure Act (H.R. 2600) and made it relevant for the 21st century.

The bill was originally intended to prevent the fraudulent sale of raw land. It aimed to ensure condo sellers disclosed information such as whether their property lies under water, shows evidence of erosion, has access to roads and has proper water supply – something sellers don’t have to worry about in urban areas.

The ill-fitting bill was never intended to be applied to our market today but lack of proper interpretation of the bill in the 1980s led federal courts to apply this law to vertical condos. Seeing the potential this bill provides buyers from becoming victims of fraud made it an easy fix. It was a matter of narrowing the old, general scope of the Interstate Land Sales Disclosure Act (ILSA) to make it applicable to today’s condo market without compromising the protection for buyers. The Senator and Congresswoman did such a good job that both the House and the Senate have approved the law and it’s in the hands of president Obama as of September 2014.

The condominium industry can be confusing and complicated on its own, as is the law. Combining both of these topics brings up a lot of complications for legislators and those in the legal system. It’s a process of trial and error. In the case of Canada, something is not working and thus, citizens and lawmakers must work together in order to set the proper protocol in place. In New York, the developments of the ILSA and the Condominium Act are perfect example of the strides we can make when lawmakers and citizens come together in order to achieve the same end.

Do you think the criminality of lawyers is a large enough problem to merit amendment by the law society? What other steps need to be taken to protect condo buyers and sellers? Let me know at @signaturemark!

5 Ways to Make Your House Greener… Without Working At It

Do you need to replace all your exit signs?

Is this Canada’s greenest office building?

Ask an electrician: Do electric vehicles come with a EV battery charger?