We have discussed Vertical Farming on The Electric Blog previously, discussing topics ranging from How do vertical farms stack up against traditional farming? to Growing Up: The evolution of urban agriculture, to The Future of Condos: Vertical Farming. But Vertical farming is still a mystery to many. In short:

Vertical farming is the future of farming. Using technology to better control the outcome of growing. Most Vertical Farming systems are stacked in layers. Some systems are soil-based while others are hydroponic or aeroponic.

The advantages of Vertical Farming are numerous, and include maximizing crop yields, control over temperature and environment, the ability to grow organically and free of pesticides, and decreased water use and transportation distance. Of these advantages, the most impactful is the ability to grow all year round, even during the coldest months of winter in locations that are allegedly inhospitable to growth. 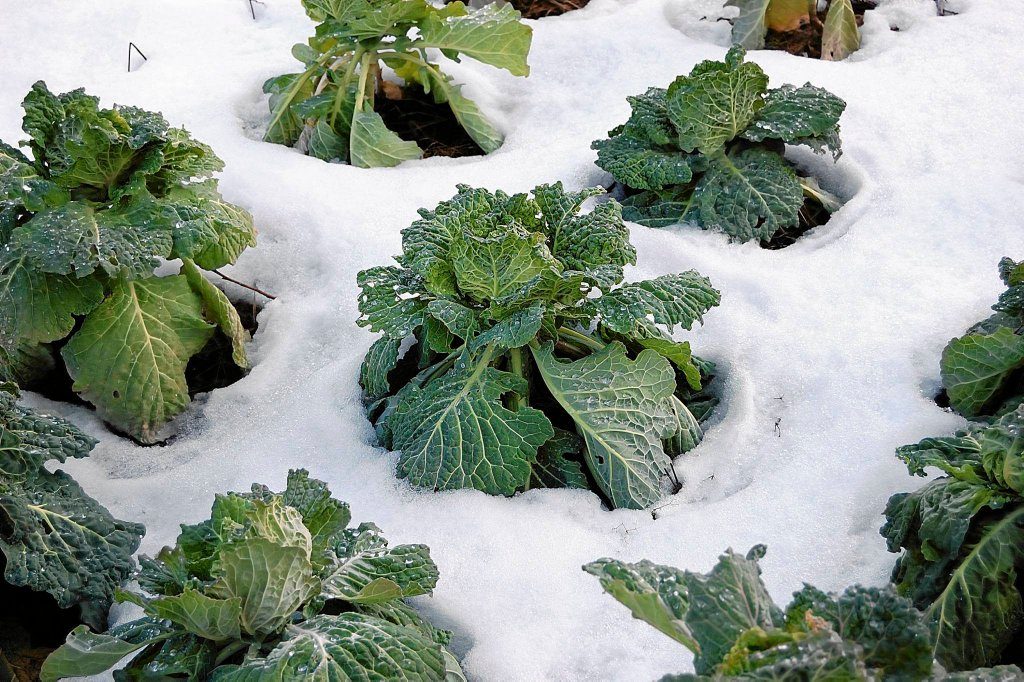 Image courtesy of Your Market Garden

Remember: Vertical Farms are not limited to producing foodstuffs. This comparison table identifies some crops which can grow in Vertical Farms, and a few that do not.

CAN GROW IN A VERTICAL FARM

Vertical Farms are a common feature of greenhouses that harness the power of sunlight, but can be found just about anywhere: rooftops, shipping containers, abandoned factories, backyards and balconies. Some general considerations for growing indoors in extremely cold conditions include:

While Vertical Farming is versatile in terms of location, one major consideration is climate, especially in cold places. In such climates a heated greenhouse or insulated indoor space is required. There are some phenomenal examples of Vertical Farming succeeding in challenging wintery climates, as you will see in the case studies below.

Vertical Harvest (Jackson, Wyoming)
Nestled in a mountainous region of Wyoming that experiences frigid winters with snowfall averages of 71.4 inches or 1.81 metres1, Jackson is known for skiing – not farming. But Vertical Harvest has set-up the ideal spot for controlled hydroponic growing – a three story greenhouse capable of generating more than 100,000 pounds of fresh produce annually. This includes over 37,000 pounds of greens, 4,400 pounds of herbs, and 44,000 pounds of heirloom tomatoes.2 The 365-day growing season allows crops to be harvested daily and sold fresh to local restaurants and grocery stores. 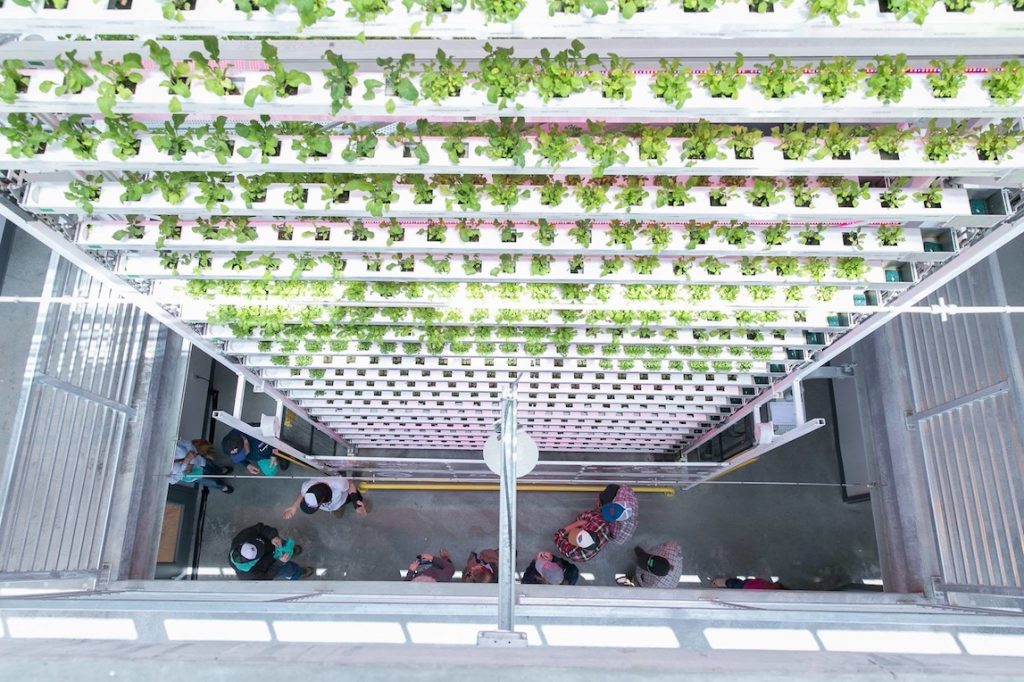 South Pole Food Growth Chamber (Antarctica)
In operation since 2004, this automated hydroponic growing facility – located in one of the coldest places on earth – supplies the staff of the Amundsen-Scott South Pole Station with fresh greens every day3. During the winter months Antarctica becomes practically inaccessible, even by airplane, and almost totally devoid of sunlight. During this time average temperatures hover at -49.8 C/-57.6F.4 The South Pole Food Growth Chamber, also known as ‘The Greenhouse’, is about 22 square metres in size and utilizes artificial lighting to grow a variety of vegetables and herbs. The Greenhouses also provides a morale-boosting escape from the harsh surroundings.5 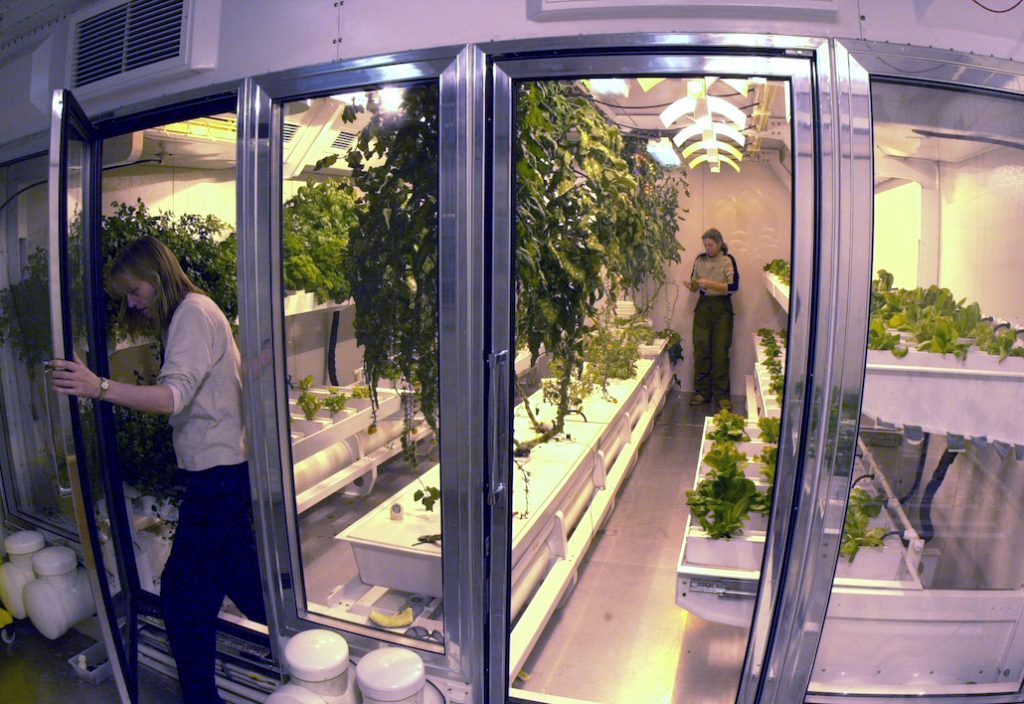 Green Sense Farms (Portage, Indiana)
The largest indoor Vertical Farm in the U.S. is located inside a 30,000 sq-ft warehouse off the shores of Lake Michigan, about 40 miles outside the windy city of Chicago. The computer-monitored hydroponic system streams water and nutrients to crops planted in 25 foot-tall racks. A partnership with technology giant, Philips, provides Green Sense Farms with 9,000 specialized blue and red LED lights which help the plants grow densely outward instead of upward. 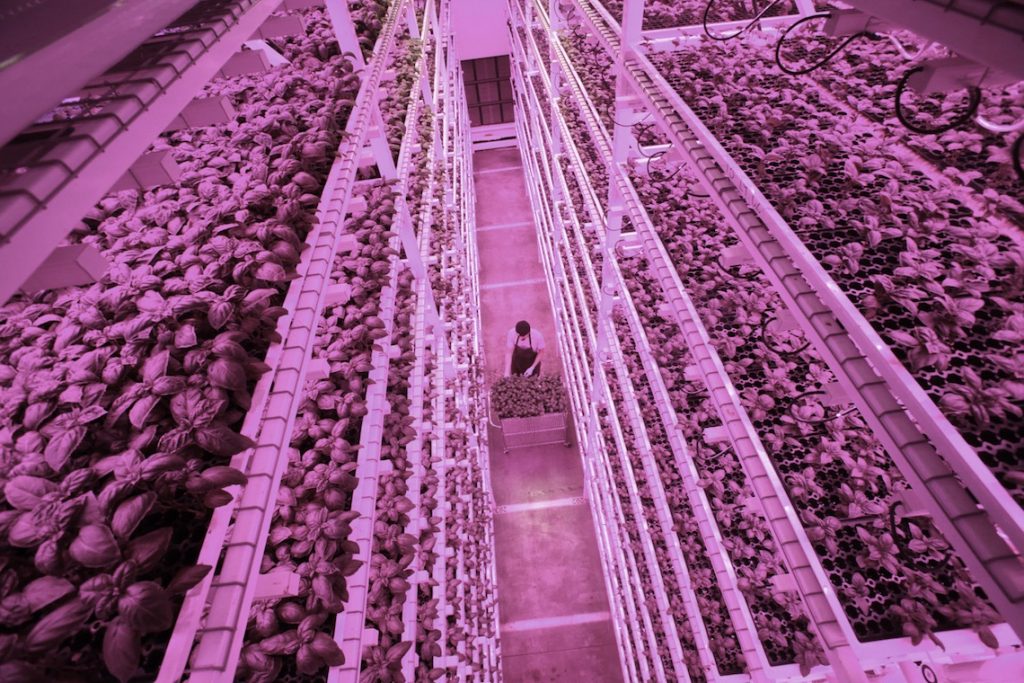 While the average field farm might get one or two chances to turn crops each year, the controlled environment of Green Sense Farms achieves a highly efficient yield. Robert Colangelo, the founder of Green Sense, describes; 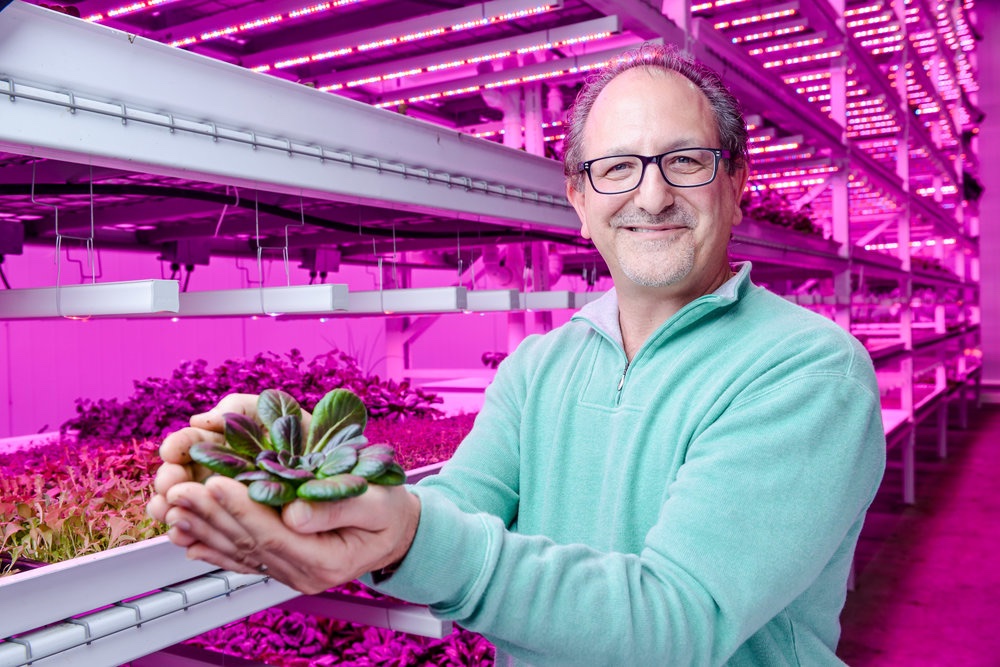 Spread (Kyoto, Japan)
Japan’s largest Vertical Farm is a large-scale high tech indoor agriculture system. Although it gets too cold to farm outside during the winter months in Kyoto, Spread operates year around, delivering produce to supermarkets and restaurants within 24 hours of harvesting. This adds up to about 21,000 heads of lettuce daily, or over 7.7 million heads of lettuce a year.7 At the moment Spread produces four varieties of lettuce, but has the potential to grow any kind of leafy vegetable. 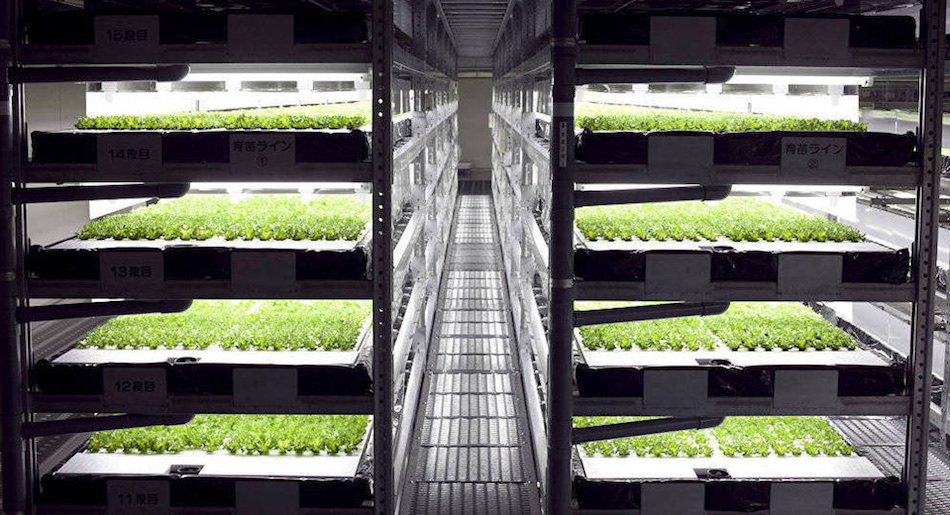 Bright Greens Canada (Saanich, BC)
The first shipping container farm in British Columbia is located on the Agricultural Land Reserve (ALR) in Central Saanich. Saanich does not experience Canada’s harshest weather, but with average daily temperatures between 8-4 °C (46.4-39.2 °F) during the winter, Saanich becomes cold enough to benefit from year-round growing. A shipping container farm uses about 30,000 kWh of energy per year – only 3 times more than the average household.8 And because the water used for growing is recycled, a container farm uses up to 90% less water than a typical 1.5 acre land farm.


Bright Greens is a soil-free hydroponic system in a container consisting of 256 vertical towers, with each tower containing 12-17 plants. Environmental sensors monitor nutrient levels, temperature, carbon dioxide, airflow and humidity. Low-energy red and blue LED arrays are capable of growing up to 3,600 plants starting from seed in only four weeks time.9

Everyone that has survived a cold winter knows the hardships of food sourcing. When ‘fresh’ food is imported from great distances, it costs more money and contributes to global pollution en route. If Vertical Farming became a way of life, the benefits would be tremendous.

We could supplant all foreign food imports in favour of the nearest Vertical Farm. We could recycle up to 98% of the water for reuse at farming sites.10 We could increase green jobs while at the same time reducing labour costs through automation. Fresh fruits and vegetables are essential to a healthy diet and lead to happier people. When combined, these factors facilitate more sustainable cities and better living.

Because Vertical Farming requires electricity to power the lights and control the atmosphere of the growing environment, the development of alternative energy sources is imperative. The last step in ensuring total sustainability would be to supply Vertical Farming systems with clean and renewable power. 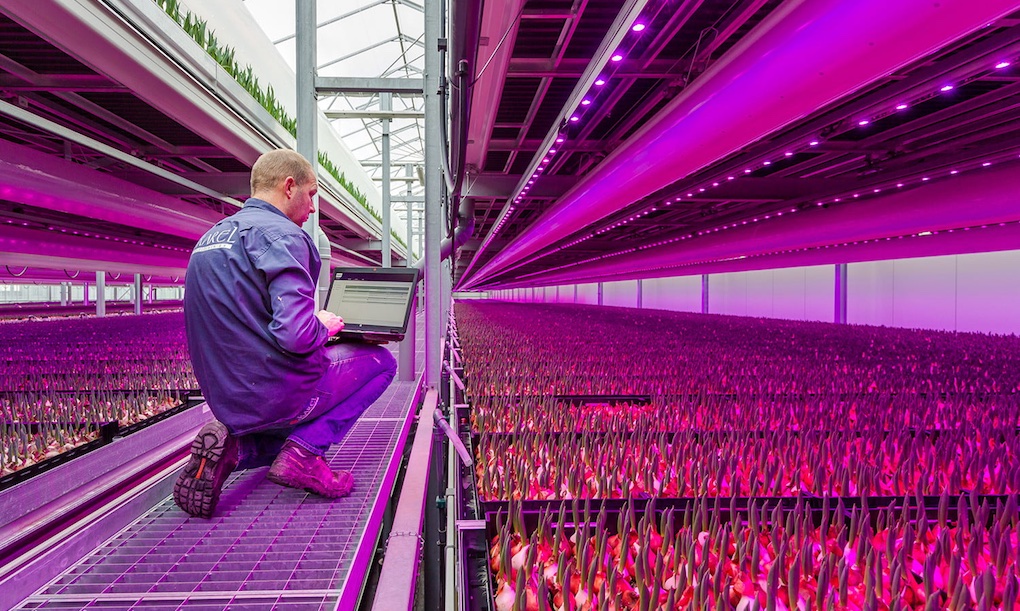 Where Vertical Farming is going and why…

We know Vertical Farms can go just about anywhere, transforming the potential of the world’s coldest areas. Now imagine if Vertical Farming was adopted en mass around the world. No longer a novel luxury but an essential service. We need to make this prospect a reality.

Keeping growing with The Electric Blog! your source for urban farming info and new tech advancements.

Our Grids Need to Be Smarter

A Condo manager and a certified electrician make a great pair