Vertical farming is taking agriculture to new heights. With traditional farming taking an ever-increasing toll on the environment, engineers have set out to create a high-tech solution.

It’s called vertical farming. By growing crops vertically, farmers will be able to achieve a higher yield, with a smaller footprint. Here’s what you need to know about the burgeoning practice of vertical farming and how it’s set to change everything from what we eat, to the world we live in.

Traditions are about to change

The negative effects of conventional farming can be seen in almost all aspects of the environment. It has resulted in: the decline of soil productivity; over-consumption of water; the rise of pesticide-resistant insects; dramatic loss of wildlife habitat; and elevated levels of carbon dioxide and other greenhouse gases. The list of effects are increasing daily. However, there’s a far more looming crisis at hand.

By the year 2050, the human population is set to increase by approximately 3 billion people. An estimated 109 hectares of new land will be needed to grow enough food to feed them, if traditional farming practices continue as they are today. At present, over 80% of the land that is suitable for raising crops is in use, with 15% of the remaining land being laid to waste due to poor land management[1]. And as the urban sprawl continues relentlessly, vast spaces of productive farmland are being eradicated.

So what do you do when you start running out of land to grow crops? The answer is simple: farm upwards.

Vertical farming is the introduction of a completely autonomous environment into the production of food. Also known as Controlled Environment Agriculture, it is made to run automatically, with an environmental computer controlling the lighting, temperature, nutrients and air flow. Compared to traditional farms, they’re around 100 times more efficient in terms of their usage of space, 70-90% less reliant on water, and have a lower Carbon Dioxide footprint. 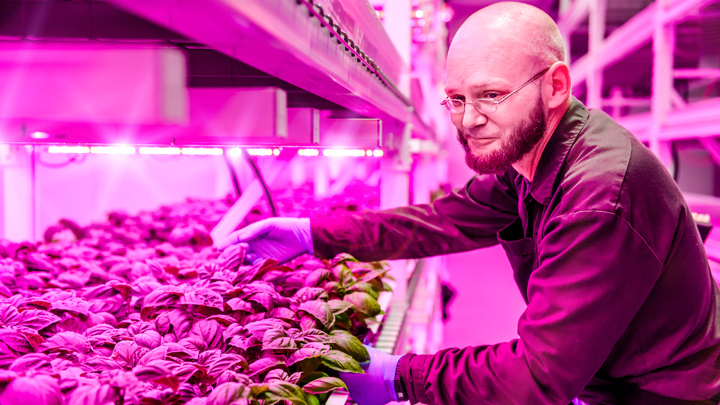 If that’s not enough to convince you, here are some other substantial benefits that Vertical Farming can offer:

1. Year-round crop production;
2. No weather-related crop failures due to droughts, floods, or pests;
3. Food is grown organically: no herbicides or pesticides;
4. It eliminates agricultural runoff by recycling gray water;
5. Energy is added back to the grid via methane generation from composting non-edible parts of plants and animals;
6. There is no use to use for tractors, plows or shipping which drastically reduces fossil fuel use.

The advantages of vertical farming are endless. And, these farms aren’t just limited to crops, but can be used to farm fish as well. Because they can be built virtually anywhere, vertical farms may be the solution to the world’s pending needs.

The negative environmental effects of traditional farming are growing and, with it, hope that vertical farming is the solution. There have been a number of successful implementations of vertical farming, including Green Sense Farms in Portage, Indiana as well as various plant factories set up by the Mirai Group in Japan.

With vertical farming gaining traction around the world, it’s possible we may soon see vertical farms on our own front door in Toronto in the not-so-distant future.

What are your thoughts on Vertical Farming? Let me know in the comment section below.

Are the Power Systems in Canada Prepared for Extreme Weather?

Urban eating – How you can make your food come to you