On March 24th, Ontario Premier Doug Ford announced that for the next 45 days, the province of Ontario would eliminate mid-peak and on-peak electricity rates for time-of-use (TOU) pricing for all Ontario residents and small businesses. As this time period drew to an end, the future was uncertain. Thankfully, the Premier announced an extension of 24 more days which will last until May 31st.

To put this into perspective, residents and small businesses of Ontario are charged for their electrical usage according to three time periods within a given day. For example: 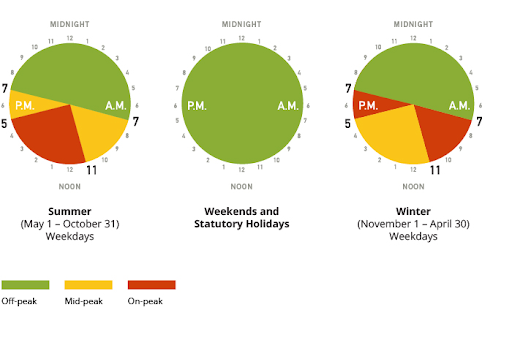 Image courtesy of the Ontario Energy Board (OEB)

As you can see, time-of-use rates generally vary according to various times of the day. The three time periods are:

Easing Financial Woes During a Pandemic

To ease financial stress on families trying to make ends meet during the Covid-19 pandemic, all households throughout Ontario will be charged the lowest electrical rate – or Off-peak fees – for electrical usage. Back in March, Premier Ford stated that the central purpose for the rate reduction is: “To help families and households across the province [by] switching to off-peak time-of-use electricity rates, saving customers over 50 per cent compared to peak rates for the next 45 days.”

The Off-peak rate is not only being offered to residents and small businesses but to farms as well: “This means you will pay the lowest rate possible, 24 hours a day, seven days a week,” further stating that “the savings will simply show up on your next bill.”

“The change will result in savings for families of more than $20 per month, he said, while small businesses will save $150 and farms will save more than $300.”
-Premier Ford

Possible Future Savings?
With the initial announcement of savings back in March, The Canadian Federation of Independent Business applauded the government for taking these crucial steps. However, at the time, they stated that they would like to see further action taken when the closure order for non-essential businesses ends.

“We urge the government to consider extending the 45-day deadline of this relief to avoid businesses that are starting back up after COVID-19 facing peak summer rates when the economy is just getting going again,” the federation said.

It looks as though the Ontario Government was listening and extended the deadline an extra 24 days. At a cost of over 5 billion dollars in Government subsidies, we can all be thankful for this heads-up initiative in recognizing the need to extend the deadline during this crisis.

For more on recent electrical news, check out the Electric Blog.

Do you need to replace all your exit signs?