On January 23rd, 2020, Toronto’s city council voted to adopt a comprehensive strategy for the integration of electric vehicles throughout the GTA. The strategy focuses on 10 key actions the city can take to assure that 100 percent of the passenger light-duty vehicles reach zero-emission by 2050.

The central goal of adopting electric vehicles is to reduce greenhouse gas emissions (of which passenger vehicles represent 30 percent) and improve the health of local residents.

The council also established Interim goals prior to its overall goal of 2050. These include an increase of registered personal Electric Vehicles (EVs) by 2025, 20 percent by 2030, and 80 percent by 2040. Presently, only about 0.6 percent of Toronto’s vehicles are electric.

Council plans to get EV-Ready

For the short term, the council recommended the expansion of current public charging infrastructure and encourages the development of public charging policies and regulations. In order to accommodate the expected increase of electric vehicles, the council recommended the installation of 650 DC fast chargers and 10,000 Level 2 charging ports in public by 2030. In addition, recommendations were made to update building codes to ensure all parking spaces in new buildings are EV-ready.

“The City has a large portion of MURB (multi-use residential building) residents, without access to a garage or driveway, who do not have this option,” the strategy notes. “Both real and perceived lack of public charging contributes to range anxiety… which makes consumers less likely to switch to EVs.”

For medium and longer-term actions, the council stressed the need for advocacy with other levels of government as well as continued support of research and innovation in electric vehicle technology. 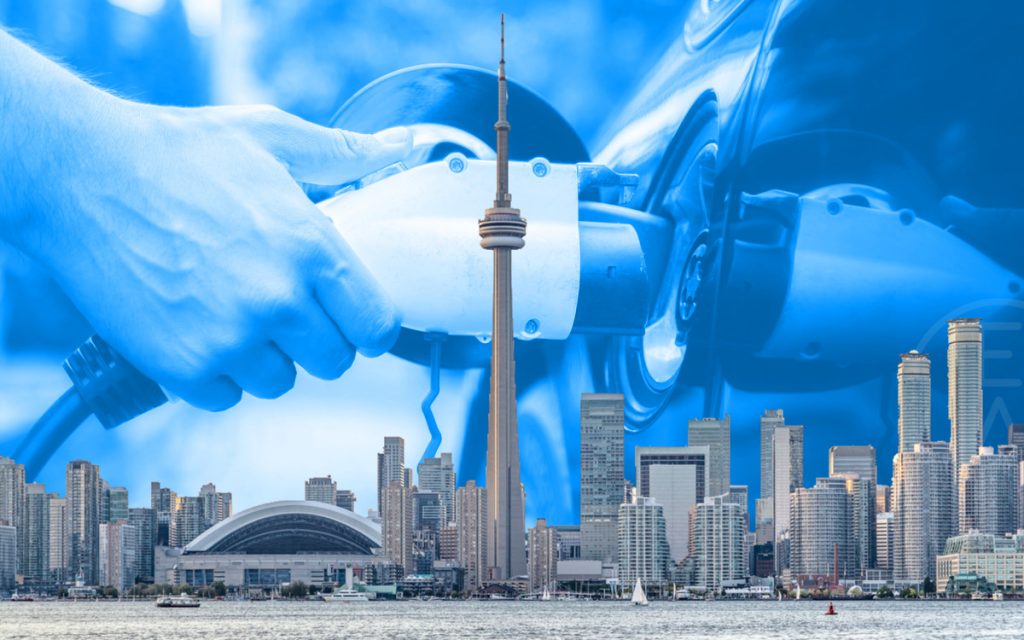 Toronto at the Municipal Level

It’s not simply the role of the Federal Government to establish and enforce new legislation on sustainability. Municipalities possess considerable autonomy in establishing policies to advance the proliferation of EV use.

“A recent report by the International Council on Clean Transportation examining the top 25 cities with the most electric vehicles internationally found that municipal policies were often the most effective in encouraging EV adoption.”
Toronto City Council votes to adopt electric vehicle strategy – Electric Autonomy

For example, London, Los Angeles, Oslo, Tokyo, and Paris have all pledged to make major areas of their cities zero-emission by 2030. London now boasts the launch of its first zero-emission street this spring which will monitor changes in traffic conditions and air quality and will ultimately provide a useful model for a pilot project in Toronto.

Toronto is not alone in their plans as Edmonton, Vancouver, Calgary, and Montreal have adopted municipal electric vehicle strategies.

Check out the next blog to see how Toronto’s latest e-buses are reducing greenhouse gas emissions.

For more on Toronto to become 100% electric, stay subscribed to The Electric Blog!

Wearable technology and your car

Mapping out the Future of EVs in Canada