Who wouldn’t want to own a car that is truly green — a vehicle that doesn’t emit pollution or require any trips to the gas station? Going green is becoming the predominant market trend to reduce both environmental and ownership costs. But while Tesla has been driving the way, traditional automaker giants are fervently trying to play catch up. And this was nowhere more apparent than in two recent but separate events: Tesla’s highly anticipated Battery Day and the Canadian government’s announcement of a $500M funding for Ford electric vehicles.

There are plenty of upsides to a worldwide race for going green. However, when you look at Tesla’s technology from Battery Day versus Ford Canada’s entry into electric cars, it’s comparing a spaceship to a horse drawn buggy.

Tesla is driving the EV industry

Tesla’s innovative business model has turned the auto industry upside down. In fact, their valuation now exceeds Ford and GM combined. Technology and software is a big part of Tesla’s advantage. Their speed for innovating high-end vehicles is more like a Google or an Amazon than an automaker. They build cars like a software product on unique hardware. And just like how Apple develops the iPhone, Tesla can improve car software functionality each and every few weeks.

One of Tesla’s most critical advancements is its battery technology. This technology also has the power to dramatically reduce the total cost of lifetime vehicle ownership. Indeed, Tesla’s battery-powered vehicles are much simpler than their internal combustion competitors. Essentially, they have much fewer parts per vehicle, around 20 versus 2000 in internal combustion engines. Their battery technology also does away with the traditional maintenance costs of oil changes and tune ups. 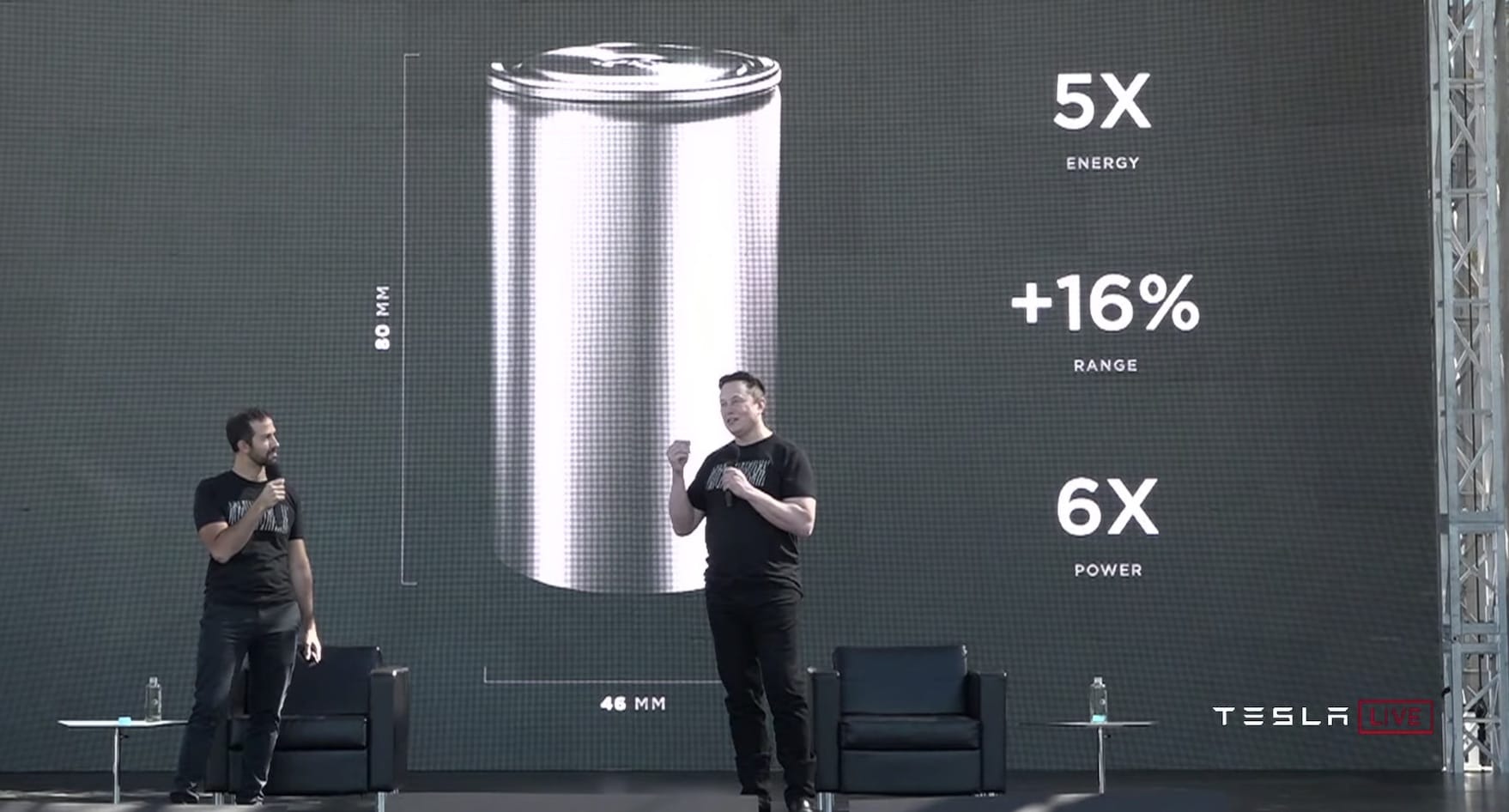 There’s no slowing down Tesla’s innovation in battery technology. In Tesla’s recent Battery Day, Elon Musk announced a series of technical upgrades to make a stronger, longer lasting, more cost-efficient battery. These advances could cut battery production costs by 56% and increase travel distance on a single charge by nearly as much. And that would also ultimately make it possible to sell EVs from only $25,000 USD.

Musk told the media on Battery Day “We don’t have really affordable EVs yet, but we’ll get there.”

Over the next three or more years, the plan is to completely redesign Tesla’s EV battery from end-to-end — from its cell design to manufacturing processes using raw materials like silicon, advancing the supply chain and mining their own lithium, and even integrating the car’s battery pack into the vehicle structure itself.

And then there’s Ford

A couple of days before Tesla’s Battery Day, the Canadian government announced that it would give up to $500 million dollars to finance electric vehicle production at the Ford plant in Oakville. The aim is to enable Ford Motor to retool the plant for mass EV production of EVs and high-tech batteries.

With pressure from environmentalists and labour groups alike, the federal government is throwing the plant a lifeline, to bring electric vehicle production to Ontario. Innovation Minister Navdeep Bains has been a longtime advocate for combining Canada’s auto sector expertise with our abundant natural resources for making EV batteries. 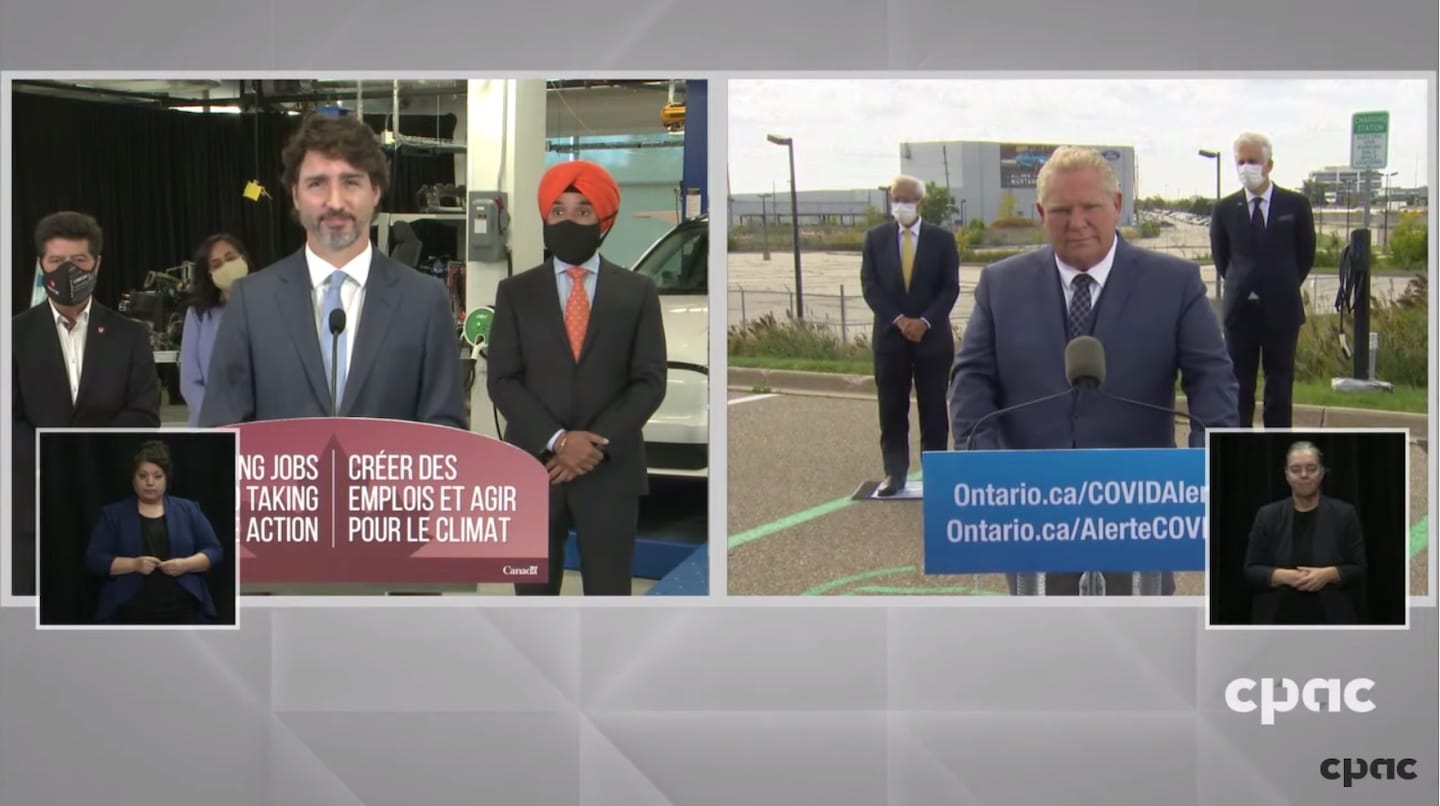 Canadian Prime Minister and Ontario Premier announce investment in what will be the largest EV manufacturing facility in North America. Image courtesy of CPAC

Canada produces about two million vehicles annually, ranking 12th in the world. EVs comprise just 0.4 per cent of that total. The push for Canada to become a powerhouse in EV production aligns with the country’s mandate for meeting an environmental goal of net-zero emissions by 2050.

Ford has agreed to build five electric vehicles at its Oakville location. But instead of developing software cars, they are more likely to create electric versions of their top-selling models and fit them with electric motors. So, as Ford hopes to acquire the right electric battery expertise, they’ll be playing catch up as Tesla’s market grows by leaps and bounds.

Developing domestic manufacturing in the EV sector will hopefully help create more jobs for Canadian workers and opportunities for Canadian businesses. However, to compete with Tesla, Ford will have to reimagine their entire business model and come up with some pretty game-changing technology.

Before taking our hard earned $500 million dollars, perhaps Ford should agree to some milestone terms and incentives? Indeed, if Ford can miraculously step up, it will be a great thing not only for Canada as a global leader in a growing market, but also for our entire global climate.

For the latest in all things electric, futuristic, and sustainable, check out The Electric Blog.