As planners try to keep up with the rising urban population with sustainable goals, to reduce energy, water, and vehicle emissions, all varied between projects, there’s an obvious necessity for a network to address the mutual concerns of new and existing buildings.

In the quest to combat climate change, there’s a vital need for unity.

A collection of stakeholders including property owners, managers, local governments, businesses and the community are forming a P3 Public-Private-Partnership in their district. It works collaboratively to implement the 2030 Challenge for Planning and Buildings, which works to provide a consistent vision for the short and long-term development of cities. It guides future business decisions, strategic planning, and municipal infrastructure and policies with one goal in mind – to build a network of sustainable cities 1.

The first 2030 District was established in Seattle, based on an idea proposed by Brian Geller in 2009 2. While studying architecture, a professor introduced Geller to what she called “Systemic Thinking”, the notion that everything in our world is interconnected 3. Eventually this grew into the 2030 Districts vision to meet humanity’s mutual needs for shelter and energy in planning for the future. Today, there are established districts in more than a dozen major North American cities encompassing over 285 million square feet of urban space, with many more emerging districts in the works4. 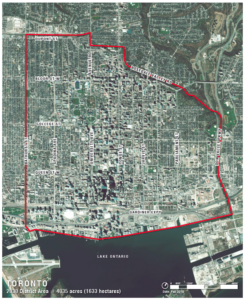 Toronto made history when it became the first urban centre outside of the United States to sign the 2030 Districts Charter in 2015 5. The Ontario Association of Architects, and Sustainable Buildings Canada co-sponsored this initiative in order to cut district-wide emissions in half, including zero-emissions from new buildings by 2030 6. The entire downtown core, from Lake Ontario in the south to Dupont Avenue in the North bounded by Bathurst Street to the west and the Don Valley to the east, is building for a sustainable future 7.


… Architects must be leaders in designing and building projects that are sustainable. That means continuing to educate ourselves, but also partnering with other organizations in the building sector to share the responsibility. The 2030 District facilitates a holistic approach to sustainable building, creating community cohesiveness to mobilize changeToon Dreessen, OAA President

The 2030 Challenge for Planning was issued by Architecture 2030 with a common goal of reducing building energy use, water consumption, and transportation greenhouse gas emissions by 50% by the year 2030. Defining specific targets and timelines allow 2030 Districts to make meaningful, measured, and verifiable progress 8. 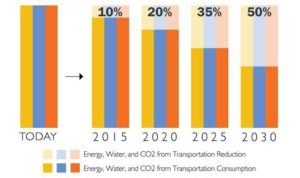 In order to reach a 50% reduction by 2030, the following performance targets for existing buildings and infrastructure operations have been made:

2030 Districts are not meant to replace or compete with existing programs, but rather, to leverage and expand programs and initiatives of community stakeholders. There is also a 2030 Districts Marketplace created to connect innovative technology and manufacturers with an eager market of potential customers.

For institutional, commercial, and residential buildings, a 2030 District offers a collaborative business model for urban sustainability. Members, property managers, and developers are given access to a suite of value-added resources, including10:

Sustainability of the future

The measurable goals of 2030 Districts are ambitious and the timeline is tight. If the global challenges we face are to be met head on, every local community must join together and actors must contribute in their own unique way.

The Toronto 2030 District is calling on all stakeholders from Building (property managers, developers, tenants), Service (architects, contractors, service providers) and Community (government, non-profit, academia) to get involved and move towards Toronto’s sustainable future11.

For more information on the 2030 District initiative, check out the website.

Our Grids Need to Be Smarter

What is Daylight Harvesting?