Each week I answer all kinds of questions related to the installation of chargers, especially in condominiums. After more than four years of installing electric vehicle chargers, I thought it was about time that I drove one myself.

I called Justin Minns, a delivery experience specialist at Tesla on Lawrence Ave, Toronto, to ask about arranging for a test drive. I told him that I wasn’t necessarily in the market for a car but I still wanted to drive one. The answer was an enthusiastic, “Of course you should drive a Tesla!”

He put me in touch with an Aaron Azzoli, an ownership advisor who set an appointment to guide me in building a potential vehicle. The first part of the appointment is about figuring out the, range, paint, wheels, interior, autopilot, lighting, suspension, sound system and seating options. A computer then displays the cost of the car with leasing and finance options, which all gets saved in My Tesla, an online account for customers to review, receive updates and change orders.

Finally I was in the driver’s seat of the Model S, with Aaron riding shotgun. And I must say, the interior of a Tesla is unlike any car you’ve ever owned. There are very few buttons and in the centre of the front console is a computer screen. Imagine your laptop screen turned sideways and bolted to the dashboard. This screen is the control centre for the car. In fact the car communicates wirelessly with Tesla and updates are sent automatically.

A look into the Tesla Model S interior.

As we drive off the lot, Aaron directed me to a nearby side street with a cul de sac and told me to “take my foot of the brakes and push on the accelerator”. This was my first of a few amazing experiences that morning.  It felt like the front wheels were lifting off the ground and I was pushed back into the seat. Aaron told me that this is 1G of force, similar to the speed that you would move in a free fall. I was thrilled. What we did next was even more amazing.

We got on the Don Valley Parkway at Lawrence and started to head south to test the vehicle’s autopilot. With hands and feet off the controls, the Model S maintained a preset number of car lengths from the vehicle in front, followed the winding road and adjusted to the traffic flow. Aaron and I just chatted as the car drove us to the Bloor St. exit. Did I mention amazing? 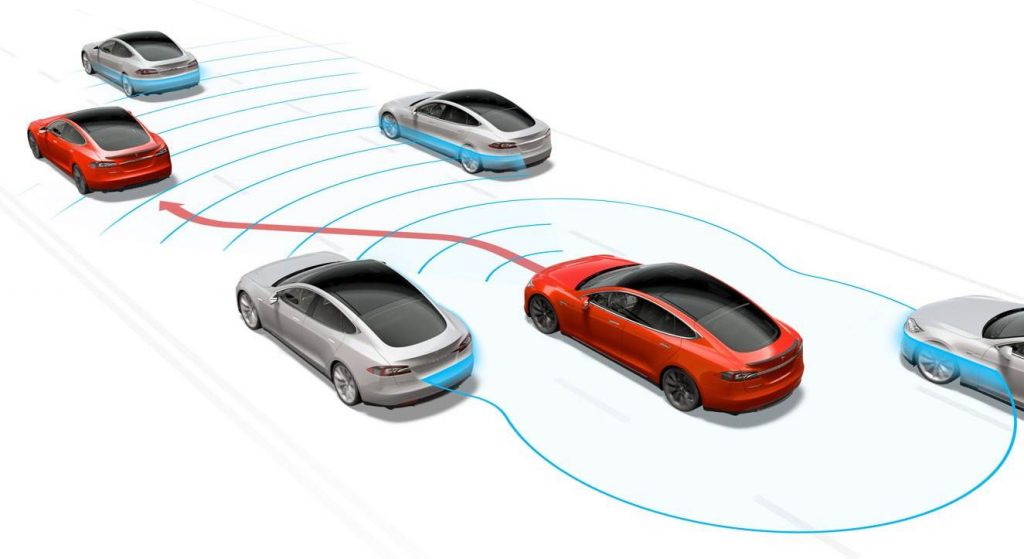 A graphic of how Tesla’s autopilot works.

I talk and blog endlessly about the future of self driving cars and I was finally experiencing it for myself. I was very comfortable as the car clearly was able to distance itself from other vehicles, follow the road and adjust as needed. I wasn’t the least bit nervous.

Aaron told me that the cars draw information from a central learned experience. Each car traveling on the road is sharing information with other Teslas.

“The whole Tesla fleet operates as a network. When one car learns something, they all learn it. That is beyond what other car companies are doing.”

When it comes to the autopilot software, Musk explained that each driver using the system essentially becomes an “expert trainer for how the autopilot should work.”

At this point I was just excited to head back up the DVP and try the autopilot again, but Aaron had one last surprise for me. We pulled in the the parking area for the Evergreen Brick Works and headed down the aisle to look for a parking space.

In fact it was the car, not me looking for a space! When the car sensed an appropriate empty space, I pressed the button on the screen and the car backed in the the spot on it’s own, but instead it was heading towards the car to the left. This actually was a bit nerve wracking. Even Aaron said that this made him nervous the first time he tried it. Of course the Tesla stopped within a foot of the car, made the necessary adjustments, settled evenly in the the parking space and unlocked the doors.

I was absolutely blown away and in love. I just couldn’t not stop telling everyone about this experience. The more that I talked about it, the more it seemed like maybe it did make sense to make the purchase. Being so involved in the EV market with Signature Electric, it only made sense to embrace the culture to its fullest.

The only dilemma I had was how to manage the limited range, especially since there are many times that I will travel across Toronto and the GTA on a given day.

The answer was to start setting my trip odometer each morning to gauge the number of kilometers that I actually drive. It turns out that a light day on the road is about 100 KM and a more active day could be 200KM. With a maximum range of 380KM, the Model S will work just fine, even on a cold day.

Insurance, that had to be the kicker. I wonder how much more they wanted if I moved from my 2011 Venza to a 2016 Tesla model S?  Then Model S was six times the value of my Venza. The answer: add $172 per year to my premium. Wow, how could that be?

The cost of your insurance is for personal injury. The Tesla Model S has the best safety rating of any car in history. The car is almost theft proof. With the data connection a missing car can be found by Tesla by just pinging it. And since there is no fuel, I guess it’s unlikely to catch fire.

So what was standing in my way now? Well not much I guess. Aaron suggested that I visit one more time with my wife, Leslie for a quick run down of the choices in my build and a short test drive. I’m sure I heard Leslie say the word amazing four or five times during our visit. She was sold. Within an hour she was regaling her friends with the story of her Tesla test drive.

I guess my choice was to buy the car or just keep telling the story over and over again. My Tesla model S will arrive in April. The colour? Tesla Signature Red of course. Anyone want a deal on a very nicely kept Toyota Venza? 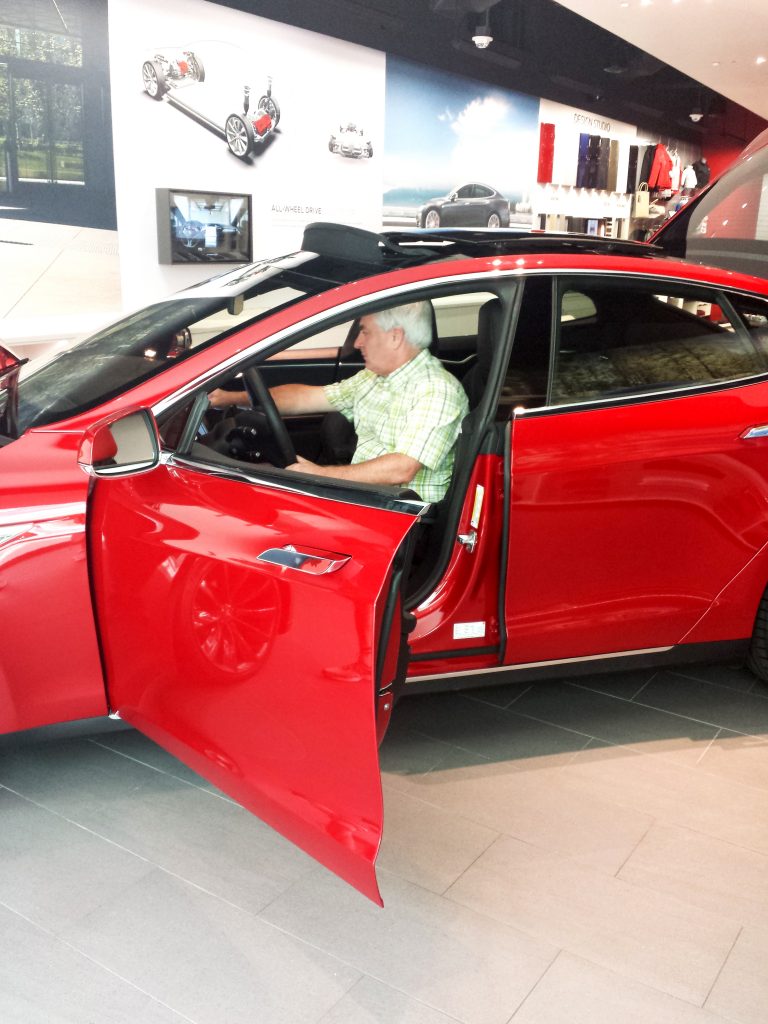 Why EV Chargers are your Condos Next Must Have Amenity

Can the average family afford an EV?