Have you ever heard of the phrase, “selling back to the grid?” It refers to the futuristic concept of consumers generating their own electricity, and then selling stored energy back to the power grid (run and operated by their friendly neighborhood power company). Well folks, that time has actually arrived. The idea of getting paid to charge your EV is becoming a reality. Here’s a look at who’s doing it successfully and how to make and sell your own energy.

For the last few years, that’s been the approach of the UK renewable energy company, Octopus Energy. With the mantra “Power to the People,” they are literally empowering consumers to capitalize on excess power production, by selling it back to central power distributors.

At first, thousands of customers thought Octopus was fake. When they received an email informing them that they could be paid for using electricity, they naturally concluded it was spam. “Most people were paid only a few pence,” says Rebecca Dibb-Simkin, Product and Marketing Director at Octopus Energy. That’s still certainly better than paying for it. But what’s particularly exciting about this model is its potential to generate what’s called “EV to grid.” Dibb-Simkin sums up the vision: “Local generation is the way the grid is moving in the UK.” 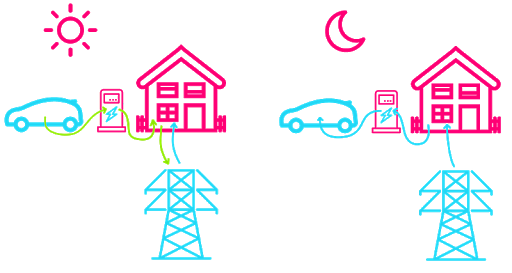 Here’s how it works. The company provides users with smart boxes that precisely determine the best times for downloading (or using) electricity, as well as the best times for selling back to the grid. Users can program the boxes to draw energy when it’s cheapest and then generate it back to the grid when there’s greater demand and higher cost. Essentially, they have the power to take and give energy at the right time.


But can we do this in Canada?

Can we connect to the grid in Canada? The short answer is yes. The long answer is: it’s a bit complicated. The Ministry of Agriculture and Rural Affairs outlines the complexities. According to the Ontario Energy Board, you can generate electricity from renewable resources to earn credits toward your energy bill or sell this energy back to the grid, through Net Metering.

Net metering allows consumers to send electricity from renewable resources directly to the distribution system, for a credit toward their energy costs. In other words, it acts like a “trade” of electricity. If consumers supply more power than what they take from the grid over the billing cycle, they’ll receive a credit toward future energy bills. The credit can be carried forward for up to 12 months.

So, with this in mind, are you ready to start selling back to the grid? The first step is to determine if you’re eligible. You need (among other things) to be generating electricity primarily for personal reasons and from a renewable resource (water, solar energy, wind, or biomass). The next step is meeting with your Independent Electricity System Operator (IESO). Once you’re deemed eligible, you’ll sign a contract with your IESO and receive a guaranteed price per kilowatt-hour.

Although options to produce and sell back energy are widely available in Ontario, consumers are well-advised to do their research due diligence. In the short time it took to research and write this blog, we discovered that many agencies are still stating that consumers can sell their energy back to the grid at $0.39/kWh. This is misleading and factually incorrect. With net metering as the new golden standard, the more accurate figure comes in at a much more modest rate of around $0.10/kWh (no matter time of day or day of the week). For those who were lucky enough to sign the previous mFIT deals, they will continue to receive the higher rate, up until the end of their contract. But renewal will be at the current rate (about four times less).

Regardless of the monetary value in selling back to the grid, we each have to decide for ourselves: how far am I willing to go in supporting renewable energy options? And with newer and increasingly better technologies, there doesn’t appear to be any slowing down this environmentally hopeful and potentially lucrative trend. One day, we won’t be able to afford not to install solar.

For the latest in all things electric, futuristic, and sustainable check out The Electric Blog.

What is an EV Charging Advisor and why do you need one?