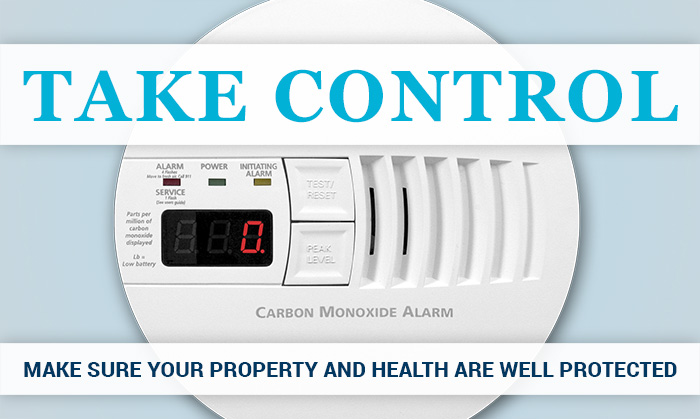 Whether you are a landlord, a condo owner, a property manager or a tenant, it’s important to be aware of the laws regarding CO alarms. These alarms may be used as standalone devices in your home and on your property or as part of a combination system with fire alarms. Whatever device you may choose to install, it’s important that it is done within the laws set by the OFC (Ontario Fire Code).

CO, or carbon monoxide, is an invisible gas produced by fuels such as propane, gasoline, natural gas, heating oil or wood that do not have sufficient air to burn completely. CO is colorless, tasteless and odorless and often goes unnoticed. Signs of CO poisoning are flu-like – headaches, nausea and dizziness, loss of consciousness, or confusion are often symptoms – and people may be exposed for hours before realizing the root of their symptoms. If the unit in which you live or manage has a appliances such as stoves, furnaces, fireplaces, hot water heaters, generators or vehicle engines, then there is an opportunity of carbon monoxide poisoning.

The invisibility of this gas makes the proper placement of the alarm more important than anyone can stress. It makes sense for smoke alarms to be placed on the ceiling as smoke rises, but CO mixes with air meaning the alarm can be put just about anywhere. Regulations state that the CO alarm must be located adjacent to all sleeping areas (in the hallway right outside of the doorway, on the wall in front of the bed) to ensure sleeping occupants will hear the alarm in case of CO leakage. If a combination alarm is used, it must be installed on or near the ceiling so it can be effective in detecting both smoke and CO.

In December 2013, the laws regarding CO alarms saw changes in accordance with the Hawkins Gignac Act’s amendment of the Fire Protection and Prevention Act (FPPA). Though municipal by-laws enforced the use of CO devices, before these OFC amendments, there were no provincial requirements for the implementation of CO alarms in buildings built before 2001. These new amendments work with the OBC (Ontario Building Code) in order to provide uniform standards of safety for building construction. Any new buildings, renovations or general building changes are regulated by the OBC whereas existing buildings are regulated by the OFC.

The regulation, coming into force on October 15, 2014, does not mean all residents and property managers must rush to the store and purchase the appropriate CO alarm. Instead, buildings with six residential occupancy suites or less have 6 months to comply with the requirements and those buildings with more than six residential occupancy suites have 12 months until the in-force date.

Residents
It is a condo owner’s responsibility for the installation and maintenance of CO alarms in their suite of residence unless prior arrangements have been made between owners and the condominium corporation which places the responsibility on the corporation.

Those who are renting are only responsible for notifying their landlord when they notice an impairment in the functionality of the CO alarm.

Landlords
If a condominium owner sublets their unit to a tenant, they act as landlord. Again, landlords are responsible for the installation and maintenance of the CO alarms unless a previous arrangement has been made with the condominium corporation. It is the landlords responsibility, and this cannot be shifted onto the corporation, to test the CO alarms annually, after a battery change, after changes have been made to the electrical circuit (if connected to the circuit) and after every change in tenancy.

Though these laws are mandatory and uniform across the board thanks to the new regulations by the OFC and OBC, it’s important that you always refer to the specific laws and by-laws that apply to your buildings. When it comes to something that can be the difference between life and death, there is no such thing as being too meticulous. For more information on these new changes, click here for the Hawkins Gignac Act.

If you have any questions or needs for installation of these devices, please contact me at (416) 490-8093 or @SignatureMark.

Power your home with the sun

How do vertical farms stack up against traditional farming?