Motivations to forgo traditional vehicle fuel (gasoline or diesel) are marked by both incentivization and concern. With gas prices rising, an alternatively-powered car promises to save its driver a significant sum. The impact of oil extraction and emissions risk our environment’s survival – a risk that can be assuaged by vehicles operating independently of fossil fuels.

There are many alternative fuels in early development, including: charcoal, steam, ammonia, algae, and liquid nitrogen. Given the breadth of this range, we have narrowed down the options to some of the most likely alternatives – electricity, biofuel, and air.

The three alternative power sources below have been selected based on:

The impact of oil extraction and emissions risk our environment’s survival – a risk that can be assuaged by vehicles operating independently of fossil fuels.

What is it?
In essence (but not scale), an electric vehicle operates like most battery-charged devices, including your own cell phone. The ultimate power source for charging EVs can include coal, oil, natural gas, wind energy, solar energy or hydrogen (also known as water-powered). The last of these options further improves upon the electric model by generating electricity within the car itself.

Cost
While some EVs are more expensive than their conventional counterparts, their maintenance costs are far lower. The investment is made more accessible by government subsidies in Canada under the Electric and Hydrogen Vehicle Incentive Program.

Environmental Friendliness
A common criticism of electric vehicles – especially those powered by coal energy – is that they are only as environmentally friendly as the process used to produce their fuel. However, a recent study revealed that EVs powered by ‘dirty’ electricity have lower life-cycle emissions than petroleum-fueled vehicles.

Viability
Fully-electric cars are already a familiar sight, courtesy of Tesla, Nissan’s LEAF and the Chevrolet Bolt EV. However, the lack of on-the-road charging stations in Canada (there are only slightly more stations in the entire country than in the state of California) pose a challenge for long journeys. This problem is overcome by hydrogen powered-options, though few currently exist (these include the Hyundai Tucson and the Toyota Mirai).

What is it?
Biofuel is used in the same manner as petroleum, but is biodegradable and derived from living sources. It is composed of one fuel or a blend of several, including vegetable oil (predominantly ethanol), methanol (wood alcohol), and animal fat.

Cost
The price of biofuel depends on both its raw material and the growing conditions. Just as a particularly fierce winter can wipe out a crop, causing scarcity and driving grocery prices higher, the production and price of biofuels can vary based on the weather. Between 2000 and 2016, biofuel’s consumer price remained below that of all vehicle-powering options barring electricity.

Just as a particularly fierce winter can wipe out a crop, causing scarcity and driving grocery prices higher, the production and price of biofuels can vary based on the weather.

Environmental Friendliness
The use of biofuels reduces carbon emissions. But farming biofuel sources on the massive scale required for its adoption poses environmental risks: deforestation, biodiversity loss, and water resource depletion. Those biofuels composed of animal fats carry both the environmental impacts of monoculture farming and those associated with the meat industry; namely methane gas emissions.

Viability
Unlike petroleum, biofuel can coagulate in cold temperatures. A compromise to this issue is offered by flex-fuel, consisting of ethanol fuel ‘cut’ with petroleum. The food vs. fuel debate is a major concern regarding the long-term viability of biofuels. Diverting crops from food production for use in the transportation sector, could create scarcity and increase food prices. But the contemporary market does not yet require significant diversion, with only 2% of the EU’s 2015 grain harvest dedicated to biofuels.

What is it?
A vehicle powered by air contains tank-stored compressed air, which is released and expands, driving the vehicle’s pistons. As with conventional vehicles, stops at service stations would be required to ‘refuel’ – but with air rather than gas. Others have developed prototypes with in-car pumps for this purpose.

Cost
While the research and technology investments required to manufacture an air model for widespread purchase (as opposed to a prototype) may push its price tag above that of gas vehicles, an air car would be extremely cost-efficient.

Environmental Friendliness
An air-powered car would be remarkably environmentally friendly. The released air’s expansion would cause it to cool, serving the function of air conditioning without harmful refrigerant chemicals. But energy would still be required during the production and assembly phase and to heat the vehicle. Popular Mechanics reports that the emissions produced by such vehicles would “come from the power plant instead of the tailpipes.”

Viability
Several manufacturers have purported to have created a scalable air-powered car, among them Guy Nègre of Motor Development International, India’s Tata Motors, and Honda. However, these models currently exist only as novel prototypes. Zero Pollution Motors promises customers the chance to own one of their AIRPod vehicles this year, while other companies are exploring hybrid options as a more accessible entry point. 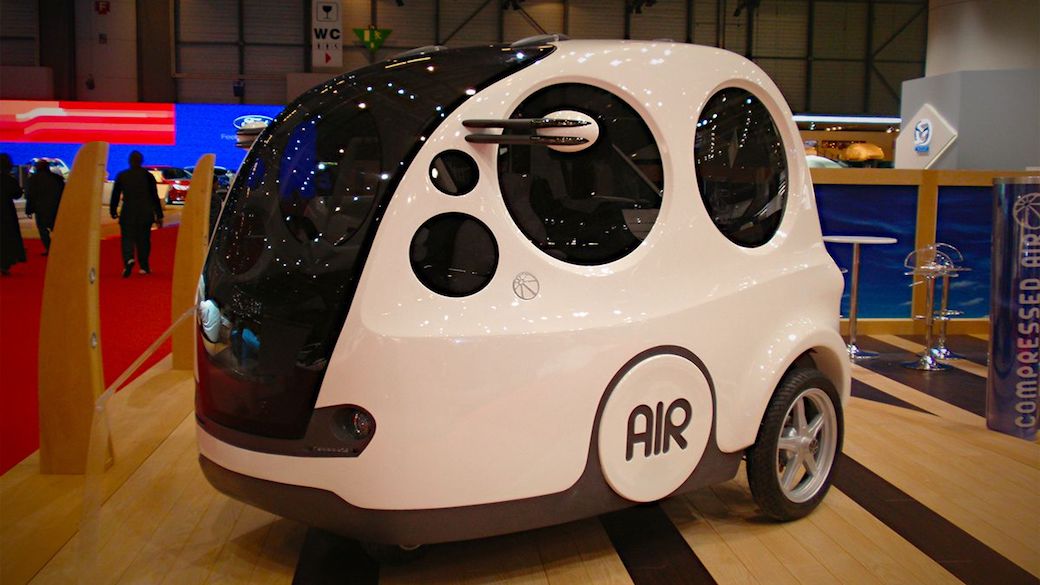 Peak oil – the hypothetical point at which the world will reach maximum crude oil extraction – is a contested concept. Less contested is the fact that, as WIRED states, “the oil that gasoline comes from will become too expensive to produce.” But based on the developments that have already been made, a future without gasoline is also a future of innovation.

Stay tuned to The Electric Blog – your source for technology news.

Arnold’s back and kicking gas